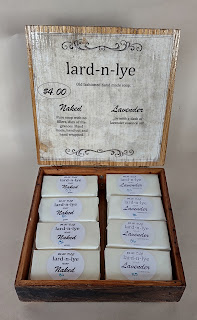 I still find myself interested in methods that have been forgotten. One method I actually did know but that knowledge was for another discipline! I knew that if you skinned a groundhog and placed the hide fur up in a shallow hole, covered it with wood ash and kept the wood ash wet for a few days the hair on the hide would be very easy to scrape off. The wood ash will leach potash (potassium hydroxide) in this process. The potash is caustic and it deteriorates the organic elements that it that it comes in contact with.

So I’m reading an old Firefox book and there is a section where the young lady goes to interview her grandmother about homemade soap. The same method called “drippin’ ash” is used to leach potash from the wood ash. “Drippin’ ash” like most hand methods is labor intensive and time consuming! Wood ash is collected and placed in some sort of container and water is slowly poured over it a little at a time until it leaks out the bottom. This process can take the better part of the day. The water that leaks out has leached a good amount potash in its journey and is the base for homemade soap. It is checked for strength by placing a raw egg in the liquid to see if it floats! If it sinks, you boil the liquid to remove water and strengthen the batch. The process is testing along the way until  the egg floats just about level with the surface of the water. If it floats up out of the liquid a little water is added back to reduce the potash level.

Now that we have the lye, we need a fat to mix with it. Mountain folk, and any one on the frontier never tossed anything out unless it was “good for nuthin’”. Bacon and sausage grease was collected in a tin each day as was other drippins’ from the stove or hearth. One story I read described “warshin’” the fat! The collected drippins’ are mixed with water in a large tub, heated to a good boil and stirred and then allowed to fully cool. The water in the mix collects the carbonized particles in the mix and it sinks to the bottom. The “warshed” drippins’ are solidified at the top and are scraped off for soap making. The fat is heated until liquefied and the lye solution is slowly poured in and mixed. There is an ample amount of mixing that goes on in this process! Lye mixed with lard has a reaction call saponification.  Heating and stirring actually reduces the time for the reaction to complete. There is another “cold” process where you just mix the lard and lye until it traces, then pour it in a mold. The rest of the reaction takes another 12 to 24 hours. In the hot method the saponification is done in the heated pot in an hour or so (or more) depending on the mix.

With the “old” method using potash, the soap will be a little soft. In the method using store bought lye, (Sodium Hydroxide)  the process will make it a little more solid, suitable for bar soap.

Saponification. The act of soap making. The process once complete will not have any lye because it is used up in the action.

Ouasioto is the Native American name for the region we now call Cumberland.       The instrument is a 28 inch VSL amalgamation of three makers from the region. The peg head is loosely based on a maker from the Jellico Creek area of Kentucky. We know of two pieces the first maker Jacob Meadors made, one in 1873 and the other in 1881.   I love the tapered peg head with an inlayed nut. The wide peg is rounded back on to the staple board forming cheeks at the bottom of the peg head.   The second maker is actually two brothers John and younger brother Charles Prichard from Lawrence County, Kentucky.   Charles later settled in Huntington, West Virginia. The brothers used a sloping shoulders on the upper bout and a tall hollow staple board. In the 1880 census John is listed as a Dulcimore Maker and Charles a Musical Instrument Manufacturer. In that same census in the county just south of Charles and East of John was the third maker…..     James Edward Thomas lived in Wayne County, W
Read more