I had made a few psaltery over the years, never really thought much about them I suppose. I was commissioned to make a 25 string birthday/anniversary gift a short time ago and the piece was my second large psaltery. Wood selection, cutting angles and the glue up is critical. It makes me nervous to think of the string tension on that sound box. Historically the pieces have a life expectancy. Bowed psaltery are a 20th century adventure in music making and the early pieces are not unlike the other zithers that failed over time. I believe hot hide glue is only good for about 75 year at best. Sure, every one has an example of a piece much older, but the rest of them succumb to age. The good thing is you can pop them apart, clean them up an re-glue!

I had tinkered with an octave bowed psaltery idea a few years back. It was unique in that the side was curved like a lap dulcimore. I believed it fit nicely in the hand with the waist of the piece being a good hand hold. This time I was working on a dulcimore that was a saw body or saw frame. It occurred to me the same concept could make a right fine octave psaltery.  There was a substantial amount of waste but there were no glue joints in the pin block. No glue joints translates into no joint failure.

I've always loved the dulcimore due to the simplicity. I love the octave psaltery for the same reason. There are plenty of tunes that can be played with eight notes. It is not overwhelming to learn and I believe that is the key. If an individual can  play the piece with ease the more likely they will be to learn more.

I started with a 2 inch by four inch piece of Walnut. I borrowed a scale from "Psimple Psaltery" and laid out an eight string scale in "C". The frame is cut out on the band saw, first the hitch pin side, then the inside is removed.  The inside cut starts at the top center and is glued back together afterward. I figured if I could glue up the top and bottom at the same time I could save one glue up so I made up a couple of semi finished planks to sandwich the  piece between while the glue dried. The edges are belt sanded smooth and the piece is then finish sanded. Several coats of oil later the holes are drilled, pins installed and it is strung. The bridge is a simple 7/16 inch square with a groove cut in the top to receive a 1/16 inch copper rod.

They aint' no secrets to zither making. Make a very light and thin sound box that can vibrate freely. One test I have is to lightly touch the back panel with my fingertip and lightly blow into the sound hole. You should be able to feel the back panel vibrate. Just handling the piece as you work it will give you a clue if it will resonate. Same as a dulcimore, lightly rubbing the peg head should be heard through the length of the instrument. 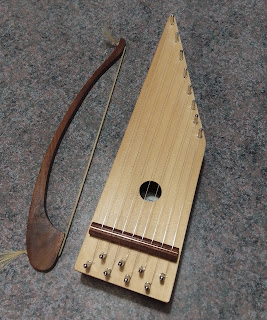 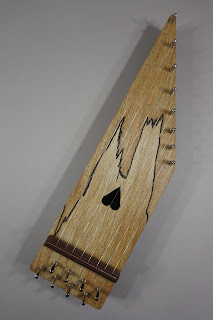 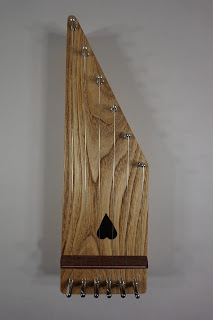 Ouasioto is the Native American name for the region we now call Cumberland.       The instrument is a 28 inch VSL amalgamation of three makers from the region. The peg head is loosely based on a maker from the Jellico Creek area of Kentucky. We know of two pieces the first maker Jacob Meadors made, one in 1873 and the other in 1881.   I love the tapered peg head with an inlayed nut. The wide peg is rounded back on to the staple board forming cheeks at the bottom of the peg head.   The second maker is actually two brothers John and younger brother Charles Prichard from Lawrence County, Kentucky.   Charles later settled in Huntington, West Virginia. The brothers used a sloping shoulders on the upper bout and a tall hollow staple board. In the 1880 census John is listed as a Dulcimore Maker and Charles a Musical Instrument Manufacturer. In that same census in the county just south of Charles and East of John was the third maker…..     James Edward Thomas lived in Wayne County, W
Read more