I didn't know what to call it. I've used girls names, descriptions and now for lack of imagination, the obvious. "Dulcimore" It is an amalgamation of the "Betty" and the "ultra-lite". I've also decided to abandon the contemporary DAd tuning set up and string selection associated with it. A wonderfully sounding Ionian 1-5-5 tuning is better suited with the bass string being just a few thousands larger than the melody and middle drone to ring proper. With an all Poplar piece it should come in at around a pound! Tuned usually up around Aee it really rings. So: 26 inch VSL 4 1/4 inch upper bout 3 inch waist 5 1/8 inch lower bout 1 3/8 inch sound box depth       Prices start at just $375 shipped to your door USPS Priority insured. All Poplar with your choice of Rosewood, Boxwood or Ebony tuners and a shellac or hand rubbed oil finish.                             Got any questions, suggestions or comments? I'd love t
Post a Comment
Read more

Master Mawhee August 2020 Sound Clip   Video      It is based on the Mawhee pieces from a hundred year ago,   just a smidge larger! I started with the peg head by laminating   salvaged pallet Pine 1X4’s and glued them up strategically cutting away all the material I didn’t need to lighten the piece. It has three store bought machine tuners that I glued Walnut scales to and finished them with several coats of shellac. The peg head was sealed with two coats of shellac and then got two spray paint base coats of black. I then started on the tail piece. It is three laminated pieces of very old heart pine, again cutting away all that wasn’t needed to lighten it. I selected the heart Pine for strength seeing it would be anchoring a number 18 and two number 8 music wire pulled up as high as they can go! I thought about making it Maple as I did with the outer layers of the peg head, but stayed with the Pine. The tail piece was also sealed with two coats of shellac and two coats o
Post a Comment
Read more

Ouasioto is the Native American name for the region we now call Cumberland.       The instrument is a 28 inch VSL amalgamation of three makers from the region. The peg head is loosely based on a maker from the Jellico Creek area of Kentucky. We know of two pieces the first maker Jacob Meadors made, one in 1873 and the other in 1881.   I love the tapered peg head with an inlayed nut. The wide peg is rounded back on to the staple board forming cheeks at the bottom of the peg head.   The second maker is actually two brothers John and younger brother Charles Prichard from Lawrence County, Kentucky.   Charles later settled in Huntington, West Virginia. The brothers used a sloping shoulders on the upper bout and a tall hollow staple board. In the 1880 census John is listed as a Dulcimore Maker and Charles a Musical Instrument Manufacturer. In that same census in the county just south of Charles and East of John was the third maker…..     James Edward Thomas lived in Wayne County, W
Post a Comment
Read more 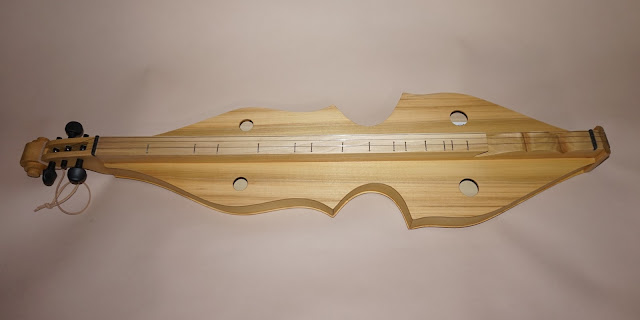 The Fiddle Dulcimore took me a while to figure out, I think I got it! With the 26 inch VSL you have your choice of nut and bridge material. Wooden tuners in an open bottom peg box for ease of tuning and restring. The piece sports a button scroll. Prices start at just $500 shipped to your door USPS Priority insured. All Poplar with your choice of Rosewood, Boxwood or Ebony tuners, shellac or hand rubbed oil finish. dulcimoredan@gmail.com   Customization; let me know what traditional aspects you want and I can make it. I make Traditional Appalachian Dulcimore!
Post a Comment
Read more

28 inch Vibrating String Length  Once the Betty design was complete, I wondered about the string length being less than the Kentucky standard; about 28.5 inches. Understanding the weight to mass ratio, I began a study to determine the dimensions of a 28 inch piece. Elongating the piece required narrowing it and removing as much material as possible and the ultra-lite was born! The very narrow waist is reminiscent of the Thomas pieces. It is difficult if not impossible to make a traditional Appalachian piece without picking up some aspect of his work! It did after all change very little in some sixty years. Although a very different approach to the traditional sound as the Betty, it simple fulfills a different tonal dimension. The 28 inch VSL is best tuned somewhere around (C), where as the Betty’s 26 inch VSL is better suited up around a (d) or even (e). Not that either can be tuned higher or lower but they have sweet spots dependent on their dynamics. Prices start at just $375
Post a Comment
Read more
More posts